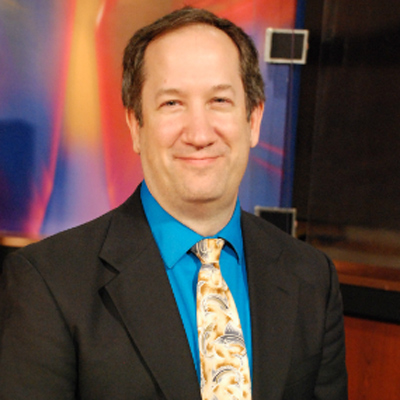 Tim Bajkiewicz, Ph.D., ("Dr. B." to most of his students) is an associate professor of broadcast journalism who joined the faculty in fall 2008 and was tenured in 2012. He spent seven years on faculty in the School of Mass Communications at the University of South Florida. He is the faculty adviser to the School's chapter of Kappa Tau Alpha. For five years he led the School's learning assessment efforts.

He's taught a number of different undergraduate and graduate courses. Since fall 2008 Dr. Bajkiewicz has been the primary faculty instructor (through MASC 465 Newscasting), executive producer and director for VCU InSight, the school’s 30-minute undergraduate student-produced TV news program that airs on WCVW-TV Richmond PBS. VCU InSight was a 2019 national finalist for "Television - Best All-Around News Magazine" in the Society of Professional Journalists' "Mark of Excellence" awards, as well as a finalist in 2016 for "Best All-Around Television Newscast" for Region 2 (Virginia, Maryland, North Carolina, Delaware and Washington D.C.). The show has taken first place in 2015, 2012 and 2010, and took third place in 2011.

He has extensive experience in international teaching and lecturing. In spring 2014 he was invited to lecture at the Communication University of China’s New Media Institute about online and visual journalism to deans, professors and journalism professionals from across China. In summer 2010 Dr. Bajkiewicz was a Fulbright Senior Specialist at the University of Applied Sciences in St. Pölten, Austria through the Council for International Exchange of Scholars, Bureau of Educational and Cultural Affairs, U.S. Department of State. He taught undergraduate and graduate classes on multimedia journalism, media convergence and new media technologies and consulted university leadership and faculty on media curriculum development and convergence. (He was a guest lecturer in St. Pölten in summers 2008 and 2009.) He's led five summer study abroad trips to Ireland.

He has served in several academic administrative roles. He's currently the interim coordinator for the School's new Media Production program after leading the task forces for its creation. From spring 2020-summer 2021 he served as the interim coordinator of broadcast operations and coordinated all media equipment and facility use. From fall 2014 until summer 2018 he served as the School's associate director, overseeing School operations including course scheduling and supervision of about 45 adjunct instructors, as well as fiscal and facilities stewardship. He managed the construction of the School's Student Services Center and $350,000 worth of classroom teaching stations and renovations. He was the lead author on the School's 300+ page 2017 self-study for the Accrediting Council on Education in Journalism and Mass Communications and coordinated the five-member site team visit that fall. He also co-coordinated the School's commencement ceremony each semester for 2500 guests and ran the School's website. From 2010-2014 he served as the School's journalism sequence coordinator, and in spring 2014 was the interim director of undergraduate studies.

His research on new media and news convergence has been published in the journal Electronic News and in book chapters. He has also authored textbook chapters about online writing and postmodern content analysis media research. He has presented dozens of peer-reviewed papers at refereed conferences in the U.S. and internationally.

He previously served on faculty in the School of Mass Communications at the University of South Florida in Tampa from 2001-2008 where he taught an innovative undergraduate multimedia journalism class in cooperation with The Tampa (Fla.) Tribune, NBC-affiliated WFLA-TV News Channel 8, and their online news operation, TBO.com, all owned by Media General (now Nexstar). He was honored with a 2004-2005 USF Outstanding Undergraduate Teacher Award and took second place in the “Promising Professors” national teaching competition in the Mass Communication and Society division of AEJMC. He was also honored with a Director’s Award by Tampa Bay-based RCS for producing a short fund-raising video for that social service organization’s successful efforts to raise $2 million to purchase property for their food bank. In 2004 he was named “Outstanding Communications Media/Technology Teacher” by the Tampa Educational Cable Consortium, which runs The Education and Learning Channels.

He began working in radio in 1987 and is an award-winning copywriter and mini-documentary producer. His professional experience includes more than 10 years in broadcasting and media at ten different radio stations (including WNIC-FM Detroit, WRQN-FM Toledo and WRUF AM/FM Gainesville) with positions as a morning and afternoon radio on-air personality, news anchor and management positions in production and promotions. He has also worked extensively in live audio production, both for broadcast and live concert production, along with audio film post-production and freelance video production.

He graduated from the Specs Howard School of Media Arts in Southfield, Michigan (outside of Detroit) in 1987. He earned his B.A. in Anthropology in 1993 (with honors) and M.A. in Mass Communications (with distinction) in 1995 from the University of Florida. He was a Roy H. Park Fellow in the Hussman School of Journalism and Media (formerly the School of Journalism and Mass Communication) at the University of North Carolina at Chapel Hill, where he completed his Ph.D. in 2002. He was co-recipient of the "Outstanding Ph.D. Student" award in 2001.

He grew up in Monroe, Michigan, which is about 40 miles south of Detroit. He is a fan of the Gators, the Tigers, the Red Wings and will always believe in the Lions. He knows too much about Star Wars, Star Trek and the last several years of Dr. Who.

Visit him on LinkedIn.